Howard University Students Are Getting Paid To Graduate

Graduating from Howard University is getting better and better!  Their new program will reimburse students their last semester’s tuition if they graduate on time.  This is just the motivation needed to keep students from procrastinating with the grant money.  Mom and dad will be just as glad as you are when you get that check in the mail!  Read more about the program here…

Howard University is going to pay its students to graduate in four years.

The school says it will cover 50% of the cost of a student’s final semester if they graduate early or on time, starting next year. A single semester’s sticker price is $11,900, so that would be a savings of about $6,000 for anyone paying full price.

And if the program motivates students to finish their coursework faster and enter the workforce sooner than they would have otherwise, they’ll actually save even more, said Derek Kindle, Howard’s executive director of student financial services.

About 46% of Howard University students graduate in four years, which is higher than the national average of 39%.

At public colleges in Texas, students earn a $1,000 rebate if they finish on time. And some schools, such as Eastern Illinois University, offer a guaranteed tuition rate for four years. After that, the cost for any additional credits would go up.

But tuition rebates have been largely untested. 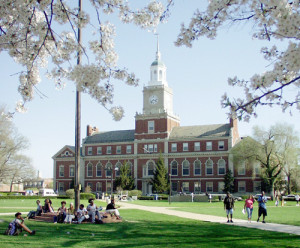 Finishing school in four years is sometimes difficult, and more than half of students across the country don’t do it. As tuition prices keep climbing, many students require lighter schedules so that they can also hold a job while going to school.

The rebate incentive is just one way Howard is trying to keep school affordable for students.

It is also freezing tuition next year, charging undergraduates the same $22,737 it did this year. That’s significantly less than the average for private, four-year colleges, which topped $31,000 last year, according to The College Board.

Most students at Howard don’t pay the full sticker price. About 47% receive federal grants, which can lower the price by as much as $5,730 a year, according to the National Center for Education Statistics.

The school already offers grants to the highest-need sophomores, juniors and seniors who are on track to graduate on time. It awarded more than $2 million through this program in the fall, its inaugural year. It also increased the number of credits that student can take in a single semester without increasing the price.

Howard University Students Are Getting Paid To Graduate